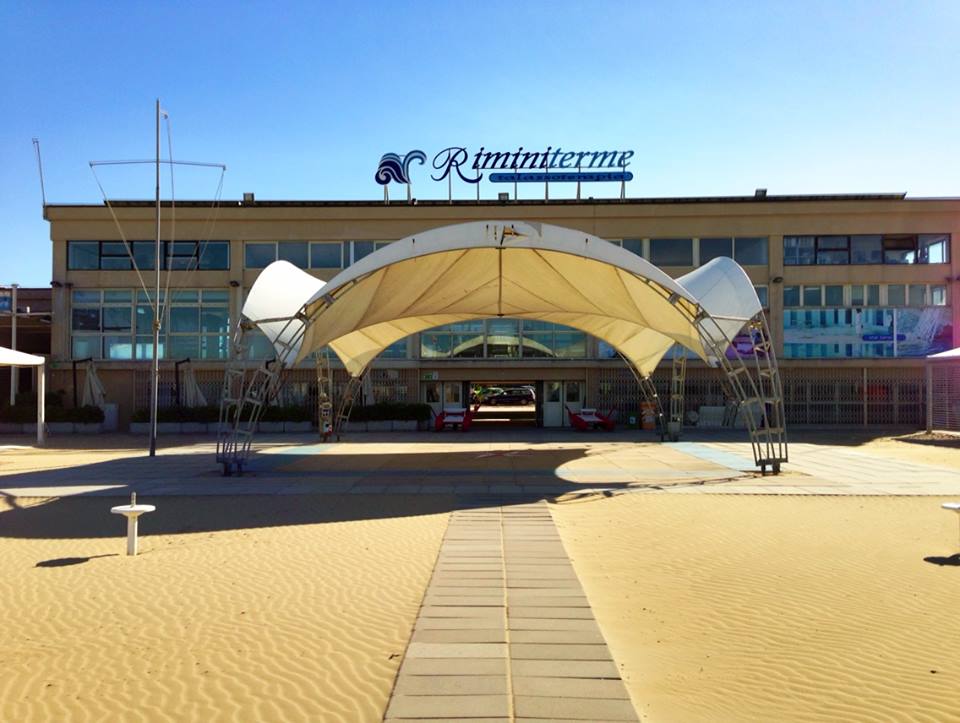 23 May Spa Day in Rimini

Posted at 07:26h in Spas & Wellness by @theplanetD 0 Comments

One thing that Dave and I always advocate about couple’s travel is the need for compromise. Dave used to enjoy ‘roughing it’ more than me, and I used to always joke that it was only 5 star luxury for me (even though I could never afford it and never stayed in one at that time) over the years, I’ve grown to love camping and I’m quite comfortable going without a shower for 8 days in a row while sea kayaking in the Baja Peninsula or driving a car through the Gobi Desert in Mongolia. And on the flipside, Dave has grown to love a day at the spa.

We took the train from Bologna to Rimini where we caught the #11 bus out to Riminiterme Wellness Centre. It’s easy to find. The buses are located right outside the train station, and all you have to do is go to the booth, by a ticket for Riminiterme and get off at stop number 34.

When we arrived at the spa, the staff asked us if we wanted to see the doctor. I have had a sore neck for two years, so I was definitely excited to talk to her. As it turned out, it was simply a quick stop to check our blood pressure and make sure that you were fit to go into the hot steam rooms. She didn’t ask us anything about our aches or pains. We had a quick blood pressure test, she took our names and nationalities and then sent us on our way with our forms in hand. We had the okay to go in all the hot rooms and pools.

Time to enjoy the Spa!

Entering the spa was surprising. Riminiterme is more like a community centre, so at first we weren’t quite sure what to expect. But as soon as we entered the spa area, the atmosphere changed completely. It was serene and relaxing and a perfect place to spend an entire day. We laid down on the lounge chairs and watched the kite surfers whiz by on the coast of the Adriatic Sea.

What is unique about this spa is that it is located directly on the beach. And what a beach it is! We had the option to go outside if we wanted, or to go for a swim in the salt water pool. It’s early in the season, so the beach was nearly empty, but it was still warm enough to work on the tan, and there were a few people outside taking advantage of the balmy weather.

We chose to stay indoors and take full advanatage of the Turkish Bath, Hot Tub, Sauna and Salt Room. We had been in a salt room before and have heard all about it’s healing powers. Since we’ve been traveling so hard and fast for the past few months, we felt that we had a lot of healing to do, so we sat in the salt for 30 minutes. We relaxed in the heated room eating fresh fruit while letting the negative ions of the salt improve our respiratory system and boost our immunity. We spent over two hours centering our minds and calming our thoughts.

It was a half hour before our massage that the media department from Riminiterme came in for a visit. We sat in our robes and chatted with them about social media and travel blogging. Even though we were a little bit embarrassed about being camera after two hours of going in and out of steam rooms and sitting in our robes, we didn’t mind because they were so darn nice! The one common thread about all of Emilia Romagna, Italy that we have noticed is how genuine and kind everyone is. They are by far the nicest people in Italy that we’ve come across and the staff at Riminiterme was no exception. We had a great talk and did a quick interview for the camera. You can check out the photos on the Riminiterme facebook page.

Our day ended with a massage that was one of the best we’ve ever had. And we’ve had a lot of massages around the world. This was an Ayurvedic massage with hot aromatherapy oils. My massage therapist dimmed the lights and lit a candle. I could instantly feel all the oils soothing my travel weary muscles and fell into a quiet trance as tranquil music played in the background. At first I didn’t feel that the massage was strong enough. Both Dave and I come from the school of “No Pain, No Gain” but as it went on, I realized that it was all about the repetitive nature of the massage and the use of the oils. My muscles started feeling more and more relaxed and aches and pains began to disappear. (unfortunately my neck is still a mess, but that’s going to have to be another trip to the doctor back in Canada)

I was given a quick facial complete with cucumbers resting over my eyelids. Once she was finished, she left me alone in the room for about 10 minutes to relax under the colourful lights changing on the ceiling. I believe this was Chromotherapy. A form of therapy where different colours of light are used to balance energy. Yep, I felt balanced alright.

The massage lasted an hour and a half and it was heaven. I didn’t want it to end. But ,alas all good things must come to an end. Our time at Riminiterme had ended and we were sad to go. If we come back, we will make sure to spend an entire day at the spa and take advantage of the beach and the pool the next time around. I think a night out in Rimini is in store too. This town was fabulous. There’s an old city centre, a buzzing beach and nightlife, waterfront hotels and hip urban cafes. It has everything you could possibly want and it’s only an hour on the train from Bologna.